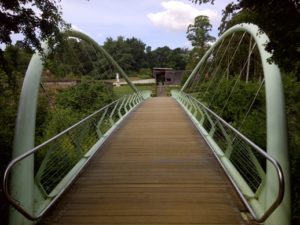 Charles Hamilton, originally from Dublin, studied in Oxford and travelled twice through Europe in the 1720-30s, like most gentlemen of his time (‘Grand Tour’). Under the influence of the enlightenment in philosophy, mathematics and politics in Europe also the garden design changed. Painshill is one of the first examples of this change and of the movement towards a naturalistic landscape form. The development of the site between 1738 and the 1770s linked woodland, water ponds and small buildings. Temples and ruins were integrated into this landscape as an echo of ancient landscapes, of paintings by Claude Lorrain and of the Grand Tour as a key concept. The Grotto, the Gothic Temple, the Ruined Abbey, the Temple of Bacchus and the Turkish Tent function as a kind of souvenirs and reminders of places visited during the journey. Furthermore the influences from the passion of plant collection at that time are still visible – the plants came from America and from all around the world. Painshill design is allocated to the Augustan Style, which refers to the Roman emperor Augustus (63BC – 14AD) and also linked to the stylistic elements of the ancient Romans that the travellers might have seen on their Grand Tour through Europe. The Augustan Style became famous in Europe and was also introduced to the gardens of Catherina the Great around St. Petersburg. However, Hamilton had a greater interest in landscape and garden design than in building a dominant villa on the grounds of Painshill, so that the latter was only built in 1774. Thus the style here is more dominantly marked by serpentines and landscape design than Chiswick House or Claremont Place. 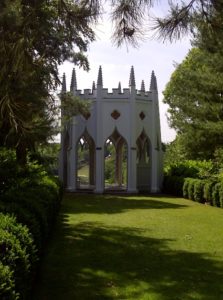 Painshill is an outstanding example for the big emancipation of Great Britain as a garden nation in Europe. For the main and most important part of the park the Painshill Park Trust, which was especially founded for only this heritage, is responsible. Not included are the Painshill House, and it only involves small patches of land. The Trust takes care of the restoration work, the day-to-day business with visitor services, seminars and the maintenance of buildings and garden. Painshill was one of the first restoration projects at the beginning of the “English Garden Industry” in the late 20th century. With the building of a new visitor centre and the new entrance bridge in 2002 the restoration work and reconstruction of most elements of the park was completed. The main aims of the Trust are the preservation and representation of a uniquely designed landscape in the Augustan Style and also the continuation of Hamilton’s style and ideas. It is absolutely necessary to preserve such a unique example of this historical development and teach the next generation with the help of this living heritage key aspect of British history.

But the money that the visitors bring to the site is not sufficient and can not cover the enormous costs for further reconstructions, for example of the Temple of Bacchus. Some of the tarmac and gravel paths also show their age of now 25 years. A change to a natural top layer material is necessary. The plantations of perennials and shrubs at the top of the sandy hill (Temple of Bacchus site) are burdened by rabbits. There have been some changes in the planting scheme in accordance with new knowledge of Hamilton’s early collections. Moreover the watering of this plantation on the current sandy soil has proved to be difficult over the last years. The character of the lawn and grassland (machinery lawn cuts of moderate length) are close to the original design. The very pleasant conversation with the three knowledgeable and ambitious gardeners (Mark Ebdon, Kate Clark, Chris Carr) reflected the hard work on the 10ha garden land of 101ha park land. They are assisted in their work by about 100 volunteers who help for some hours per month, so that in the end 10 full jobs exist for the site. The maintenance of the park aims at presenting an authentic landscape of the 18th century, with little time to spend for maintenance per hectare by giving more space for instance to wild flower meadows. The character of the management shows some parallels with sites managed by English Heritage.