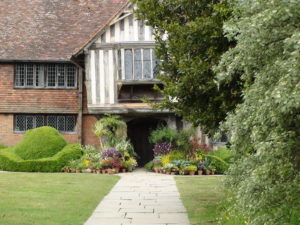 A English Flower Garden in Kent.

Built between 1912 and 1921 Great Dixter is a typical example of the Arts and Crafts Movement. After Nathaniel Lloyd had sold his printing company in 1912, he studied Architecture and wrote books about brickwork. In 1925 he published a book on gardening, particularly about yew and box. Especially the English brickwork and the brick country houses had a great influence on the architecture in other European nations, also Germany. The results of Lloyd’s research documented in his books can easily be seen on the walls of the garden, the steps and walls in the Sunk Garden and the Topiary, and in all other hedges of in total six miles.

There is no better place than a garden to represent the craftsmen’s work and object the industrially and mechanically produced goods that are without any aesthetic and decorative design. The connection of floral ornaments and the quality of the materials used, well formed and individually produced by skilled and creative workers, has left an echo in this garden. It was the time, when gardening became popular as a pleasurable activity also for owners of a villa. This was linked to the fact that due to the industrial development a larger scale of people made more money and maintained their own land. On the other hand, with the raising costs for labour not even all noble or great families would be able to pay these costs, especially the wages, and thus began gardening themselves.

With a view to the garden style of the Arts and Crafts movement, Great Dixter House and Gardens presents the typical enclosed areas, Western Gardens, a Walled Garden, a Sunk Garden with a basin – all combined with geometrical beds; these kinds of beds are also found in the High Garden for vegetables and plants in the nursery, and they all are situated close to the house. Further in the south and downhill there are meadows and the transition to the Wild Garden. The Long Border is an addition by Christopher Lloyd from the mid 20th century, which still reflects even today one of his personal planting schemes in context with the key layout.

Since 2006, the year in which Christopher Llody died, the garden and the Trust have been managed by the CEO, Fergus Garrett, who had been the former right hand and Head Gardener of Christopher Llody for over 20 years. The maintenance and the business of house and nursery keeping have been continued without any gaps. This continuation means that neither the design of the years before nor the current one is ‘frozen’. In contrary, ‘continuing’ in the sense of an orientation on the original design and the basic ideas of the place sometimes does or has to include changes. Great Dixter greatly benefited in the second generation of the garden from Christopher Lloyd’s work and his ambitions in gardening and horticulture. Advantageous for this place is that there are not so many tree plantations, as they could change the character, especially when being replanted. Due to the high numbers of visitors more effort needs to be made to preserve the original substance of the site, especially with regard to the bricked staircases, plaster etc. Especially these stone elements indicate the high frequency of visitors in the last decades. The condition of the garden including plantations, maintenance, quality and pottery is an outstanding example for a well managed site. This way of maintenance started nearly 100 years ago. With six gardeners and five students for 24 hectares there are approximately two hectares für two hands. An older scale is one gardener per acre, but this is a proportion for a kitchen and flower garden. The management of the garden reflects the two main tasks of Great Dixter: to present an outstanding example of a private Arts and Crafts Garden and a working garden manufacture founded by C.Lloyd in 1954. But it is the responsibility of this and the following generations to preserve the key aspects of this garden by not maximizing the existing beds in the High Garden and by cutting the numbers of visitor to an acceptable number.